No, we can’t go swimming in that….Ew!

Earlier this week we had some crazy rain one day and this was the result.  Off our backyard is an overflow water retention area that collects water so that the sewer system isn’t overloaded.  When it rains hard, we get a rather impressive lake of sorts in our backyard.  The ground was so saturated that we were getting water in our sump pit that was periodically being pumped outside.  It was a really crappy day but I was happy that our sump pump was working and didn’t need to be replaced (as was the case with so much else in this house the last 10 months).  Yay for underground pumps keeping the basement dry! 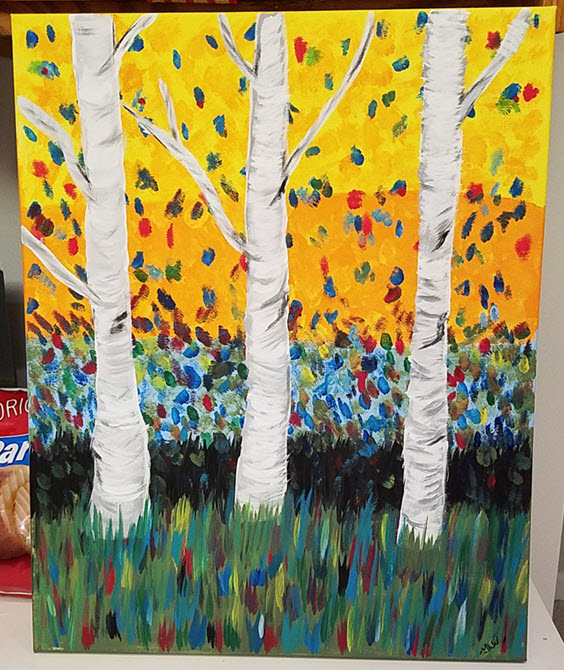 The wife had a bunch of friends over last weekend to have a painting party.  They get together monthly for some random activity that months host decides on and I’m happy they spend money on tangible things rather than on alcohol (which is what they used to do).  This is one of her best paintings and will certainly get a worthy spot on the wall in my office.  I’m starting to run out of wall space though, so I may need to come up with a genius plan to extend the available space so I can keep hanging her artwork.  If I ever get around to building the enclosure around the sump pit and the radon exhaust system in the corner of my office, I’ll add quite a bit of new wall space.  Motivation, where are you?

Our cat, Harley, was being cute again on Tuesday night.  He was even looking at me when I took the picture as if to say he knows he’s cute.  The fuzz butt was repaying me with this shot for having yacked in the only room in the entire house with carpet.  Queue the steam cleaner at 5:30am in the morning because if I didn’t clean it up, my wife would have definitely stepped in it.  I opted to clean it up as that annoyance was so much smaller than the phone call from the wife saying she stepped in it and yelling at me for not cleaning it up.  He’s almost 12 by the way, with bad teeth that cause sinus infections and weepy eyes.  Fuzz butt cuteness makes up for any frustration we have with him though.

I’ve had an on and off again relationship with Facebook through the years.  I decided, after much thought, to sign back up and ONLY create a page to attach to my blog.  I did that, but in the 2 weeks since I had my account re-created, it has been disabled for 10 of the 14 days it’s been created.  I’m back on at this point, but it’s a only a matter of time before they disabled me again for some other random reason.

Another work of art from my wife’s Girls Night group.  It’s in my office, where all the other ones are.  It’s funny she doesn’t think she’s good, but I think it’s actually brilliant.  I certainly can’t do this.

Trump “State Of The Union”

I streamed the Presidential address on my Roku, and it was ironic that it was FOX News that was streaming the broadcast.  I added the laser beams from Trump’s eyes and added the bubble “FAKE” if you’re wondering.  Just some humor for today.

It seems strange to me that I’m still using the “Winter” graphic when for the last few days, it’s reached 70 and has been absolutely beautiful here in the north east.  I hope it holds out, but this is how it was last year just before we had 30″ of snow dumped on us over a long weekend in March.  Here’s hoping that I get to use my repaired snow blower before having to stow it away again until next year.

This is hard to look at when I’m feeling vertical

My wife came home one weekend with a large painting she picked up from the local Home Goods store.  She ended up getting it for $15, accidentally marked down as clearance, and its now hanging up in my stairwell from upstairs to downstairs.  It matches the front door, when its open, otherwise it’s something that still startles me every morning as I walk down to get coffee and leave for work. 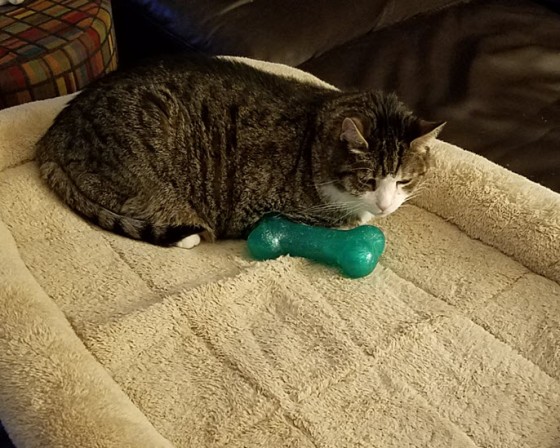 This dude, named Harley, is an old asshole of a cat.  He not only stole the dog’s bed but also stole the dogs chew toy.  Every time KC would come over to grab it, Harley would swat at KC’s nose and she would wimper away to my wife or I to help save the day.  I just looked at KC and told her to grow a pair and grab the toy from the cat that has no claws.  KC is such a wuss.

Probably the most hilarous thing I’ve seen in the office to date.  One box showed up, as usual, from the guy that has three daughters.  A few days later, another box showed up that I thought was an amazing bargain.  Decide for yourself if you think it’s as much of a bargain as I did, because saving a penny is better than not saving a penny.  Oh, and I’m “that” guy, I put in exactly $3.99 for a box of cookies.  I went over a hour or so later and took back the change and gave the guy $1 in return. 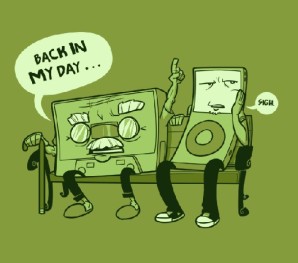